Montclair, NJ – If you headed down Park Street from Upper Montclair for bagels or coffee at Montclair’s Watchung Plaza this morning, a new “Right Turn Only” sign was there to greet you at Park and Watchung Avenue before you hit the plaza. That sign is one of two new signs; the second is at the roadway coming out of Watchung Plaza, telling you to make a right turn only onto Watchung Avenue. According to Councilor at Large Peter Yacobellis, the Township only approved the second sign at Tuesday’s council meeting.

“Our intention this week was only to approve the right turn only from the Watchung Plaza roadway onto Watchung Avenue going east; not from southbound Park St. onto Watchung Ave. going west, as well,” says Yacobellis. “That’s something that we were considering but hadn’t yet taken formal action on. Somewhere along the line there was a misunderstanding between our team and the county team and we’re trying to figure it out and correct the situation.”

The Township Council recently requested that Essex County commission a traffic study for the Watchung Avenue, Park Street, and Watchung Plaza area. Four crashes have been reported at this intersection in 2022, including an incident with a mother and child being struck by a car on March 14.

“The County concluded, in agreement with the Township engineering team, that we should make Watchung Plaza onto Watchung Avenue a right turn only. That would stop cars who come to a point (with Local coffee/UPS store on the right) from going across the intersection or to the left and eliminate one of the problems there,” said Yacobellis, who characterized this change as a preliminary but necessary first step to a broader study of the intersection with respect both to safety and circulation and an eye towards potentially a better design. 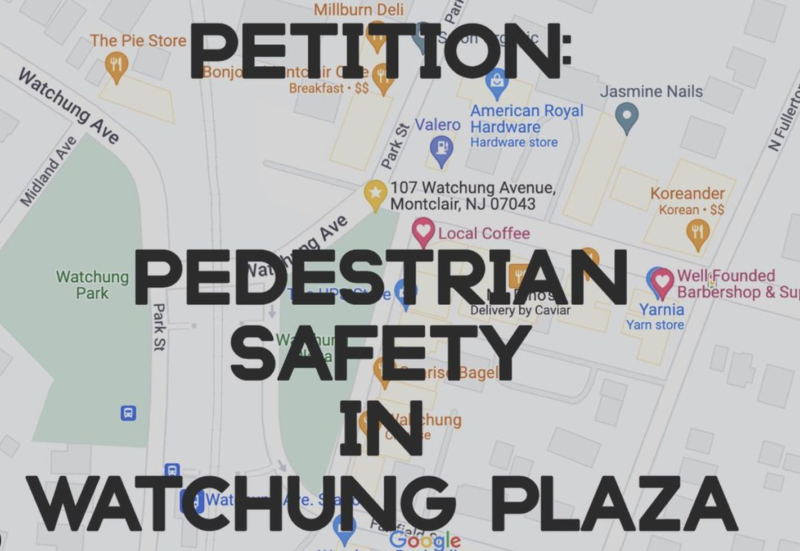 More than 1,000 people had signed a petition for a pedestrian safety traffic study at Watchung Plaza. The petition was started by Local Coffee’s Robert Genovese, who said he has a “front row seat” to the dangers at the intersection, including a recent incident involving a mother and child who were struck by a vehicle.

According to Essex County Commissioner Brendan Gill, the other concerning intersection in the township is at the corner of Valley Road and Mt. Hebron Road, where 16 accidents have occurred in the past two years, including an accident in June of 2021 involving the Bradford School crossing guard being hit by a vehicle. Three accidents occurred in the month of November 2021 alone, one involving a turned-over car on a weekday morning while school was in session. Gill said he was also involved in a car accident at this very corner in February 2022.