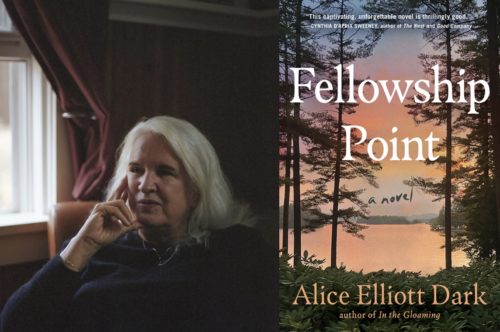 Montclair author Alice Elliott Dark’s epic new novel, FELLOWSHIP POINT, follows a pair of friends through a lifetime of joys, tragedies, and accomplishments as they work to uphold the values they hold dear and overcome the obstacles they encounter. Intertwining family conflict, environmental and cultural responsibility, and the bonds of intimate friendship, the 600-page story is both immersive and relatable. The characters embrace admirable qualities even though readers might recoil from some of the choices they make. Dark has created a world with recognizable problems and pleasures which challenge the characters within it and leave readers feeling satisfied and perhaps a little more ready to face their own everyday turmoil.

Lifelong friends Agnes and Polly are in their 80’s when the novel begins and still manage to experience tremendous growth by the end. Through journals, sparkling dialogue, and scenes that shuttle back and forth through decades, readers will laugh, be surprised, and notice a tugging at their heartstrings (and tear ducts) as characters confront the physical and emotional realities of aging, tremendous grief, persistent longing, aching disappointment with family and friends, and more. Set in Maine, with side trips to Philadelphia, Fellowship Point is a literary journey that feels like a substantial vacation from current events despite its emphasis on modern themes.

Fellowship Point has received starred reviews from both Kirkus Reviews and Publishers Weekly, and fans of Dark’s are eager to spend the summer engrossed in her first novel in almost twenty years.

We spoke with Alice Elliott Dark in preparation for the July 5th release of FELLOWSHIP POINT. Watchung Booksellers is also hosting the author for a book launch reading and event on July 6th, 2022 at 7 PM.

Baristanet: Friendship, especially the intimate friendship between Agnes and Polly, wraps the entire novel in its influence. However, both friends have reasons for masking part of themselves from one another. It seems like each fears rejection from their friend. How does their friendship strengthen throughout the novel to allow more openness?

Alice Elliott Dark: Agnes and Polly value their friendship highly and intend for it to last the length of their lives. They grew up together, so they know they are very different, and therefore don’t always understand each other’s choices. They have a lot of respect for each other, which is a greater factor than any fear of rejection. They can’t imagine rejection, actually. They are the kind of people who believe that friendship will always find a way to rise above disagreements. Their friendship strengthens during the book both through sharing a common goal and by living through very painful moments at each other’s side — and apart.

Baristanet: Some of the most revelatory moments in the novel appear via journal entries and letters. How did you choose to share so much of Nan and Agnes’ relationship in this way? Was it always a part of the novel?

AED: Well, there is a lot more where the current pages came from. Once Agnes started writing a journal in the form of letters to her sister a few hundred pages poured out. I didn’t plan on it, but I have always loved epistolary stories and novels, so when I chose to think about a 19th century novel form when composing this book, the letter form came in naturally and fit well.

Baristanet: Agnes uses journal and letter writing to keep memories of loved ones alive and to share some of her deepest emotions. She’s kept them to herself, both the journals and the memories within them, for most of her lifetime. What changes in Agnes to allow her to share them?

AED: The whole novel is a portrayal of how people can change, and how much hope there always is. Agnes changes in many ways, including letting go of her need for control and seeing the past from new angles. Both of these changes allow her to show her journals to others. Her journals tell a story she has never shared with anyone, but as her wall of privacy is broken down, she realizes she wants to share the truth of her younger self and the cause of her long held pain and guilt.

Baristanet: Agnes keeps a secret about novels she’s written that we, as readers, learn early in the novel. Do you imagine it was difficult for her to keep her authorship of the adult series from her sister and Polly? Was she worried Polly would tell Dick, or was it about wanting to remain a true “fly on the wall” in anonymity?

AED: Yes, it is very hard for her not to tell her sister Elspeth or her great friend Polly about her novels, but she also understands that keeping a secret is a big request, and she doesn’t want to burden them. She isn’t worried that Polly might tell Dick. She trusts Polly. But she knows how much it would hurt Polly to have to not tell Dick. Agnes chooses to spare her this conflict.

Baristanet: FELLOWSHIP POINT is modern in many ways — the warm focus on indigenous land, conservation, single motherhood, treatment of animals and more feels very current. Still, the style of the novel hearkens back to the quiet but assertive storytelling power of Remains of the Day or The Age of Innocence. Was this a conscious choice? Did the layers of intertwining tales demand the more deliberate structure?

AED: Yes, this was a very conscious choice, perhaps the only one I made. I saw a mini-series and then read a novel called He Knew He Was Right by Anthony Trollope—is that not an excellent title? It is as twisty as a book could be. It gave me an ambition to learn how to build a strong plot with subplots and digressions. I’d read many 19th century novels and all of Edith Wharton and Kazuo Ishiguro, so I had familiarity with carefully plotted novels but had never before thought I might write one. It was a real learning experience, very far away from my early belief that I was a poet, but it was fun.

Baristanet: Fellowship Point is a high scorer on the “Bechdel Test” scale. Focusing on older women and single mothers naturally created female-focused conversations and a highlight of the values the main characters hold. How did this focus elevate themes and values you wanted to showcase?

AED: Oh, I score high on the Bechdel test in life, and have many very tight friendships with women and conversations that can go weeks without touching on MEN as a topic. I do value that and share that value in the book. It was important to me to portray both a married woman and the two women who are independent of a close male relationship. These lives are all rich and full.

Baristanet: Protecting the land of Fellowship Point, specifically the nesting area the characters call The Sank, is a major thread throughout the various storylines. Protecting the land comes across distinctly as spearheaded by women. The “nesting” area, the history of the Abenaki on the land, and the burial plots, seem to add to the preservation of the area by the women. It’s a true stewardship. Why was this such an important aspect of the story for you?

AED: I’m gratified that you noticed all of this. Land ownership and stewardship is a central theme because what’s more important? We are looking at wars right now that have as a goal the annexation by one country of the territory of another country or group. Our national parks are threatened by private energy interests, and development isn’t far behind. There are property disputes even over the seas and rivers. I have always been perplexed by the notion that anyone can own land. It seems irrational, and it leads to irrational behavior. It’s deeply implicated in current debates over the need for gun ownership in this country.

I was also inspired by learning how many thousands of acres of land donated to state and national parks were given by women, and how many women founded parks, sanctuaries, and land trusts. As I was writing the book, I was following the effort of Roxanne Quimby, a founder of Burt’s Bees, to donate 120,000 acres of Maine woods to the public in various ways. Vested interests made that process difficult, but she was able to prevail with compromise and modification. Women in all states weren’t legally allowed to control what they did with the land they owned until 1900. They had to abide by the decisions of their father and brothers. I developed a theory that women live more lightly on the land by not having a long history of ownership. We are new to it in this country, and came to ownership in a post-Thoreau, post-Audubon time when ideas about preservation were as available as ideas about exploitation. Many great women have sought to be agents of land preservation.

I found an arrowhead when I was very young, which led to a lifelong interest in the indigenous people who’d lived wherever I am. I am glad that awareness of who first inhabited a place is becoming more prominent.

Baristanet: Fellowship Point comes full circle, in a way, by the end of the novel. Why was it important to include a fate for the land that none of the residents would have considered at the beginning of the novel?

AED: I am very interested in how people change and have a special interest in conversion experiences. They can come out of nowhere, but they can also be born of a long period of focused thought and desire. Agnes sees what should happen with the land in a conversion moment, but the buildup to the sudden insight is grounded in decades of care and experience. Often the simple right thing to do is obscured by tradition, social mores, and general opinion. Agnes sees a fresh solution that mirrors what happens at the end of a book or story of this kind—in hindsight, it seems inevitable.

Baristanet: Fellowship Point has an expansive cast of characters, each with a distinct personality and effect on the story. Its themes are universal with a focus on women – but not necessarily femininity. It’s wide themes will appeal to so many readers. Have you had any surprising responses?

AED: I have been gratified by how much male readers enjoy the book. I’ve gotten many nice responses and notes from men who appreciate, as one man said, having the curtain pulled back on the lives of women beyond the purview of men. It was a great joy to write this book, to spend years with these people and on beautiful Fellowship Point, and I think that comes through.