Today, the Supreme Court ruled to overturn Roe v. Wade in Dobbs v. Jackson Women’s Health Organization, eliminating the constitutional right to an abortion after almost 50 years and sending shock waves through communities around the country and raising concerns about contraception and same sex marriage rights.

President Biden, speaking from the White House Friday morning, condemned the ruling, stating “It’s a sad day for the court and for the country.”

“In New Jersey, women will always have full autonomy over their own bodies and the right to make their own medical decisions,” said Gov. Phil Murphy. 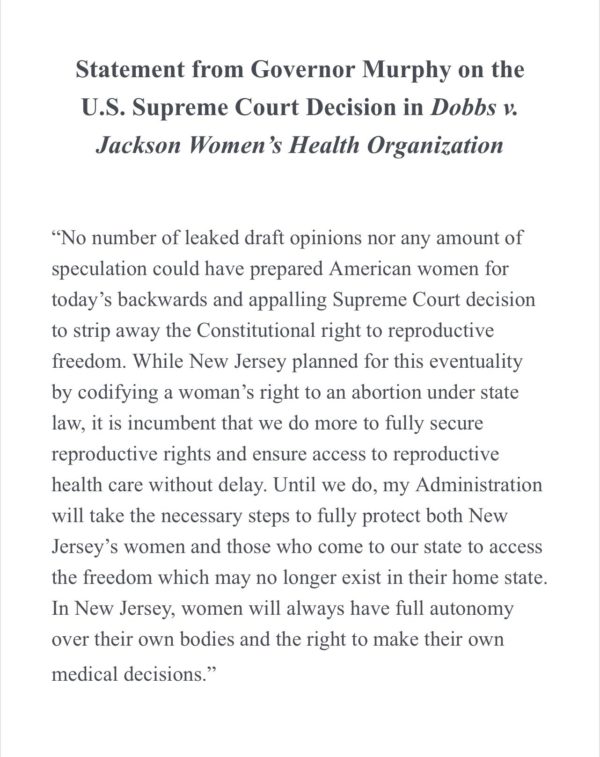 “This decision is not conservative, it is radical. I had hoped against hope that the decision wouldn’t be as extreme as the leaked draft. The court is rolling back a constitutional right, out of step with the majority of our country and almost 50 years of legal precedent.

“The freedom of women to control their bodies should not hinge on a state line. Women in Alabama, Texas, and Oklahoma deserve the same rights as women in New Jersey. With the end of Roe, 28 states will likely take action to prohibit abortion entirely; 13 states already have trigger bans in place. Many of those bans contain no exemptions for rape, incest, or the health of the mother. Lives and livelihoods of women across the country are not safe.

“We are at a crisis moment in our country. I will continue to stand up against government overreach, defend reproductive freedom, and push my colleagues in the Senate to codify Roe.”

The ACLU of New Jersey, in a statement, said the ruling will have deadly consequences, with the harm falling hardest on Black women and other people of color who already face disproportionate discrimination and suffer the consequences of a severe maternal mortality crisis

“The decision of when and whether to have a child is a fundamental human right, and the U.S. Supreme Court’s overturning of Roe v. Wade upends core autonomy and privacy rights in many parts of our country,” said ACLU-NJ Executive Director Amol Sinha. “ This moment calls for bold action; anything less is unacceptable. We urge lawmakers to immediately take action to ensure New Jersey expands access to abortion for all as nationwide bans loom.”

Acting Attorney General Matthew J. Platkin had this to say:

The U.S. Supreme Court’s decision in Dobbs is a devastating setback for women’s rights and the rule of law in our country. For five decades, the Supreme Court has repeatedly recognized the fundamental right to choose whether to terminate a pregnancy. Today, however, a bare, right-wing majority cast aside decades of settled law. Their decision is as dangerous as it is wrong. The Court’s legally indefensible ruling will inflict harm on millions who will wake up tomorrow without meaningful access to legal abortion care – inevitably forcing these procedures into the shadows, where they will be unregulated and unsafe.

But make no mistake: Abortion still remains legal in New Jersey. The Freedom of Reproductive Choice Act, signed into law by Governor Murphy earlier this year, protects the right to choose to terminate a pregnancy in New Jersey. That remains just as true now as it did before the Supreme Court’s decision.

Today is a dark day for our country. But the fight to protect abortion rights is far from over, and New Jersey stands ready to lead the fight. We will continue to use every available resource to protect access to abortion care for New Jersey residents and others who seek to obtain care in this State.

Today, the U.S. Supreme Court abandoned 50 years of established precedent and took the truly unprecedented step of stripping American women of the reproductive rights that the Court, regardless of its political configuration, had recognized and protected for more than half a century. In their unconscionable decision to overturn Roe V. Wade, the conservative majority on the court revealed itself to be a complicit partner in the Republicans’ long and well-orchestrated campaign to reverse nearly a century of progress on civil rights, voting rights and equality, and deprive women, people of color and our LGBTQ+ community of their basic human rights and protections against discrimination and violence. We tend to think about this Republican campaign as an effort to roll back the clock or return to the past, but it is all about the concentration of power in the future. In a country that refuses to provide affordable childcare or health care or address issues such as poverty or affordable housing in a meaningful way, there is no more effective way to disempower women than to remove their reproductive autonomy. We must see this for what it is.

The United States has long had the highest maternal mortality rate among developed nations. We lag woefully behind the developed, industrialized world in all matters related to women’s health care, and due to our lack of action on this issue, the number of women who die from pregnancy and childbirth related causes in America rises every year. The Court’s decision further devalues and endangers women’s lives.
We must call out the vulgarity of those who invoke the concepts of “freedom” and “liberty” as code words for the singular mission to rob large segments of our society, based on gender, race and sexual identity, of their most personal freedoms and liberties. This horrific decision will have far reaching and devastating consequences for all of us, perhaps unforeseen even by those who right now think they have scored a victory. The empowerment and enfranchisement of all members of our society makes us a stronger, more stable, more productive and prosperous society.

It is difficult in this moment to not be overcome by hopelessness and powerlessness, but the hope lies in our power as voters. Our legislators in Washington must step up and enact federal legislation to protect the health and safety of American women; our governors must follow the example of New Jersey Gov. Phil Murphy and pass measures to protect women’s healthcare and reproductive rights. If they won’t, we must make them answer for it at the polls. Elections matter. The Court just handed us another urgent responsibility to take action for our children, for future generations. We may not be able to hold the Supreme Court accountable, but we can turn our feelings of hopelessness and powerlessness into hope and power with our vote.

In a statement on Facebook, Montclair Councilor at Large Peter Yacobellis stated:

I’ll never understand the solace in being “pro-life” when we’re in a nation that doesn’t provide nourishment, medicine, healthcare and a good education to every child. I see the celebratory comments from Republican officials that “life won today”. To that I say, put up or shut up. Either pivot billions of dollars from weapons to caring for children or hush up. I’ll wait.

Be furious. But do not be violent. And be good to yourself. Watching cable news is a waste of time. You fight back by registering voters, voting and winning elections.

The long game to restore this right for women and families starts with every election henceforth. No more sitting them out. Every vote and every election matters because as you can see, elections have severe consequences.

Be good to yourself today and please be kind to each other. That’s what you can control today. 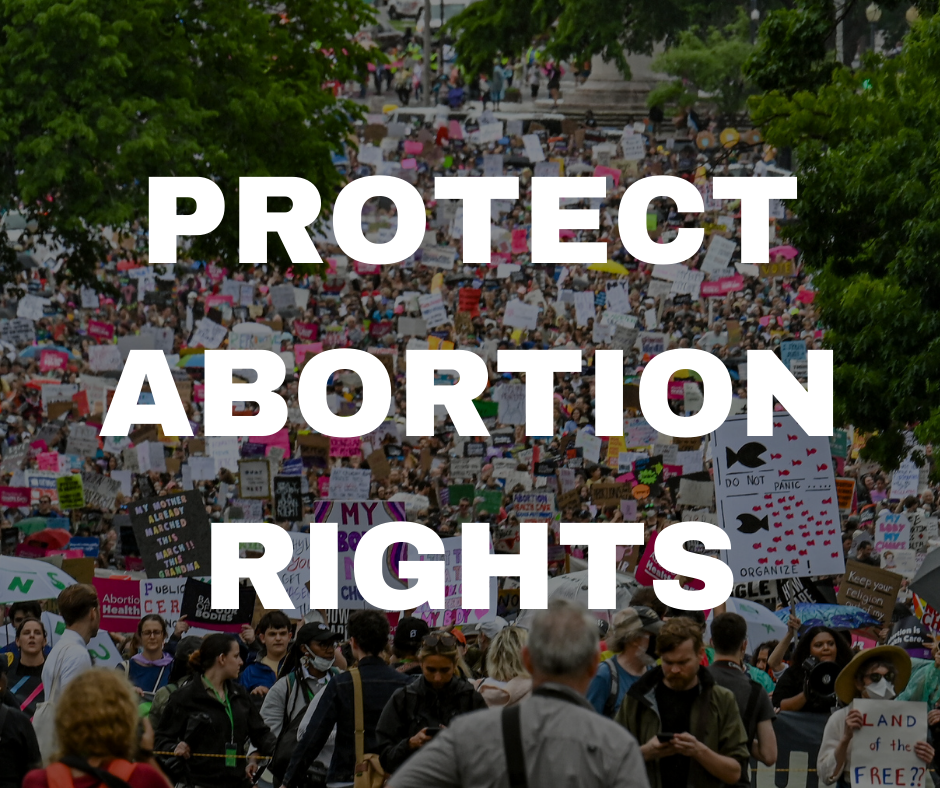 BlueWaveNJ will stand in community and solidarity at Spiotta Park, South Orange, tonight at 6 p.m. and asks for participants to bring their signs, voices, family and friends.