Montclair, NJ – In 2020, Montclair mom Natalie Hackett shared how her daughter was the victim of bullying, harassment, abuse, discrimination and a playground assault by a group of boys.

Hackett accused the Montclair School District of negligence, saying it breached its duty to protect her daughter, who attended Buzz Aldrin Middle School. Hackett says her daughter, who is African American, became the victim of bullying, harassment, abuse, discrimination and a playground assault by a group of boys. The incidents started in 2018 when her daughter was 12 years old.

Hackett, frustrated with the continued bullying and lack of action by school officials after sending some 200 emails reporting 50 incidents, had raised her concerns about the bullying publicly at a Montclair Board of Education meeting in May 2019. The Claim then states that the District hired a private investigator.

In August of 2019, the family filed a formal complaint with the US Department of Education’s Office of Civil Rights (OCR). The outcome of the investigation placed the district on a Corrective Action Plan (CAP) and they were instructed to address the findings.

A petition was also started in 2020, calling for a safe school environment for Hackett’s daughter. Then, in August 2020, Hackett helped organize a Black Kids Matter rally where speakers included former Montclair students who shared their experiences with racism while attending Montclair Public Schools.

Youngman says the district did nothing to address the bullying and Hackett’s daughter ultimately had to leave the district and attend a private school. This month, Hackett and Youngman filed a lawsuit, with defendants including the Montclair Public School District, the Montclair Public School Board of Education, the Buzz Aldrin Middle School, Dr. Jill Sack, Major B. Jennings, Andrew Evangelista (a former anti-bullying coordinator) as well as two former School Superintendents Dr. Kendra Johnson and Dr. Nathan Parker.

The suit, like the tort claim before it, details incidents from September 2018 to June 2020, more than 50 instances of harassment, intimidation and bullying, including students calling Hackett’s daughter racist names including “tar baby” and “burnt toast.” Incidents include bullying at school as well as by text and on social media pages.

“I don’t know why a certain amount of racism is tolerated,” says Youngman, who said the district has not responded at all to the tort claim or the suit. “It’s the board and board defendants — individual administrators, teachers, staff — who are obligated to make sure that a child is safe and properly supervised. There was clear and blatant racism and sexism.”

“Bullying is about isolating, victimizing and ostracizing the victim, so when the school singles out the victim rather than punishing assailants, you are fostering this climate and culture that condones this and everyone sees it,” Youngman adds.

A March 2022 report shows how Montclair Schools fared on Anti-Bullying Bill of Rights Act standards during the 2020-21 school year. 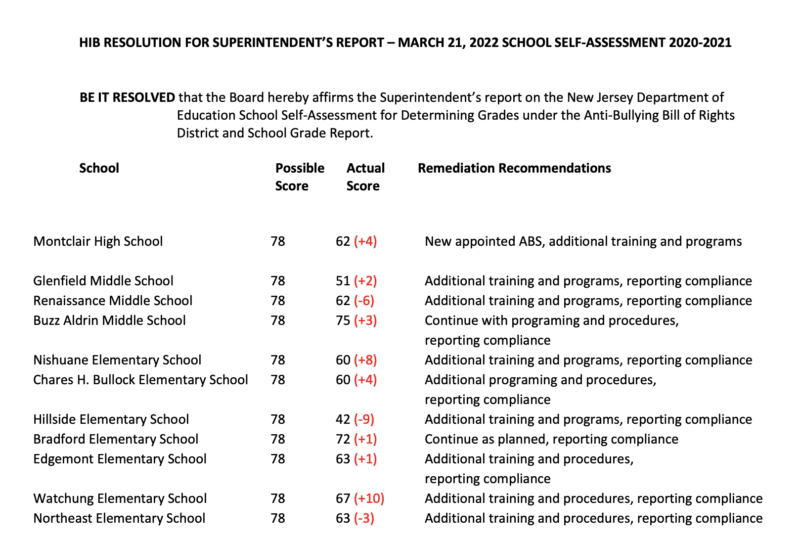