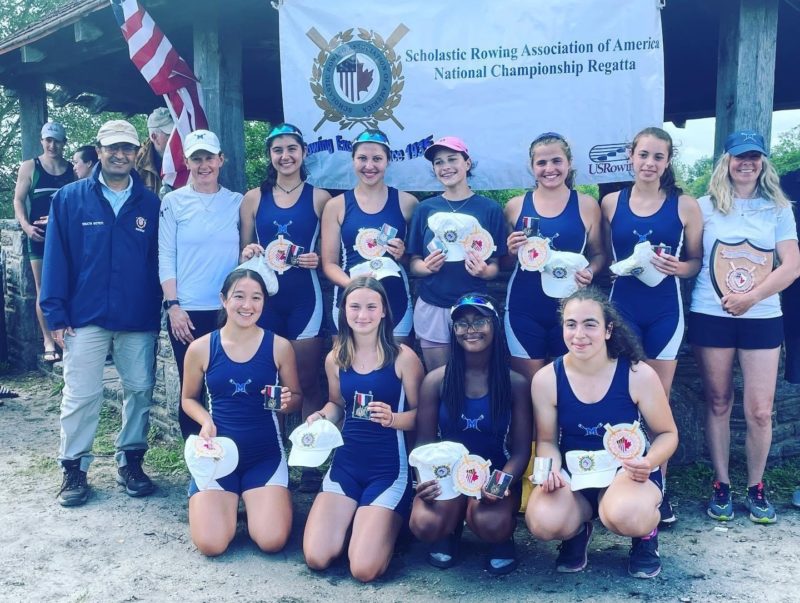 Montclair, New Jersey – May 29, 2022 – The Montclair High School Rowing Team’s Spring 2022 season is coming to an end and what a showing it has been!

On the heels of winning four more NJ State Championship titles at the Garden State Scholastic Championship Regatta on April 30 and sweeping the men’s points trophy, the Mountie Rowing Team has not slowed down, competing and winning back to back championship regattas for three weekends straight – while continuing their daily training regimen in addition to the demands of school to ensure they were
championship ready.

Following their 61st NJ State Championship program win, they set their eyes on the Stotesbury Cup Regatta in Philadelphia, the oldest and largest global high school regatta. Competing against some of the fastest crews in the nation, 8 of out 10 boats advanced to the finals – with the Women’s JV8+ and Women’s Freshman 8+ bringing home silver for their respective categories.

But there was no rest for the weary…..the next day, after a weather cancellation the week prior, the team pivoted quickly and returned to the Schuylkill River to compete in the Philadelphia City Championship Regatta where they brought home another Championship in two categories – the Men’s 2V8+ and the Women’s Freshman 8+. And the medals didn’t stop there- the Men’s 1V8+, Women’s JV8+ and the Men’s JV4+ also took silver with the Women’s Freshman 2x delivering the bronze.

Based on their strong performance in 2022, Montclair Rowing had 8 boats qualify to compete at the Scholastic Rowing Association of America (SRAA) National Championship on May 27th and 28th and once again returned to Camden with eyes set on Gold….and they didn’t disappoint!

Montclair rowed strong, competing against 150 high school rowing teams and over 470 boats, with 4 of their 8 boats advancing to the finals. In the end, it was a day for the Mountie women as the Women’s JV8+ became SRAA National Champions beating Mt. St. Joseph’s by over 3 seconds. The Women’s V4+ and Women’s Freshman 8+ brought home respective Bronzes. 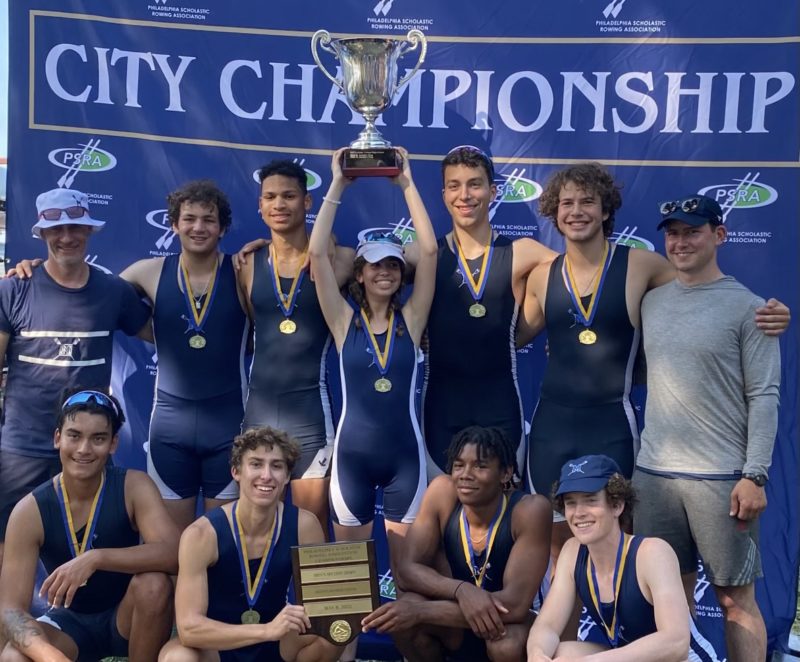 As they wrap their season, Coach Michalitsianos states, “It’s been wonderful to have the support from our parents and school at races for the first time since 2019. The results this year showed how resilient the team has been and the success of both the men’s and women’s teams is a testament to their commitment to putting in the many hours of training that is needed to achieve success. The women’s JV 8 becoming National Schools Champions was the culmination of dedicated athletes and coaches striving to be the best. I am very proud of all of our athletes and what we were able to achieve this year and incredibly grateful for the support we receive from our parents, school, district, and community as we continue to compete on the grand stage.”

While this concludes the regular season for the Montclair High School Rowing team, the run continues for 3 of their 10 boats – the Men’s 1V8+ and 2V8+ and the Girls Varsity 4+ which have qualified to race in the US Rowing Association’s Youth National Championship Regatta in Sarasota Florida from June 8 to 12.
This US Rowing Association event is considered the premier junior rowing event in the United States and is expected to draw approximately 2,000 athletes representing more than 200 Rowing Clubs and High School teams from across the country, all vying for national titles across 18 boat categories. The championship is held at Nathan Benderson Park in Sarasota, Florida and has historically drawn upwards of 5,000+ spectators to cheer on their respective crews and witness some exciting, competitive racing.

The Montclair High School Rowing Team has a long legacy of winning national and international
championships – a huge feat for a public high school rowing team which competes in a landscape of prestigious, privately funded prep schools and clubs. The program celebrates its 20-year anniversary this year and is led by former Great Britain International rowing coaching duo, Jeremy Michalitsianos and Lorna Rundle. This unique public high school program is rich in diversity, talent, and spirit and is comprised of high achieving student athletes who are consistently recruited and accepted into the most prestigious universities in the country every year.

In the 2022 class alone, their men’s and women’s athletes were recruited to Dartmouth, George Washington, MIT, Skidmore and Tufts, while other members of the graduating class will attend Princeton, Syracuse, UC Berkley, , UCLA, UMass, and UCSB in the Fall.

Congratulations to the Montclair Rowing Team on an incredible season as SRAA National Champions, NJ State Champions, Stotesbury Cup Medalists and Philadelphia City Champions and good luck to them as they take on Youth Nationals in Sarasota!

To learn more about Montclair High School’s Rowing Team or sign up for any of their rowing programs including their Summer Learn to Row Camps, visit www.friendsofmontclairrowing.com to REGISTER today.