Montclair, NJ – The Humane Society of the United States is offering a reward of up to $5,000 for information leading to the identification, arrest and conviction of the person or persons responsible for the illegal trapping of a red fox in Montclair.

“This merciless and illegal action by one individual highlights the cruelty associated with wildlife trapping,” said Elissa Frank, New Jersey state director for the Humane Society of the United States. “We are grateful to Montclair Animal Control for their swift and compassionate response to end this poor fox’s agony, and we hope this reward can help bring the offender to justice and prosecute him/her to the fullest extent of the law.”

The crime was called in on Tuesday, June 21 by residents who observed the fox caught in a coil spring trap, desperately trying to free himself. The residents called the Animal Control Service Request Line Tuesday morning around 7 am, says Montclair Township Animal Control Supervisor Michele Shiber.

The fox illegally trapped in Montclair had a compound leg fracture from the coil-spring trap and appeared to have been gnawing on its foot in desperation to try to free itself from the trap.

Shiber and Animal Control Officer Urbano secured the fox and transported it to the local animal hospital, where it was humanely euthanized due to his injuries.

Coil spring traps are foothold restraining devices used to catch and hold wild animals like coyotes or bobcats. These traps have been prohibited in New Jersey by legislation since 1985.

The last time an animal was caught in an illegal trap in Montclair was back in August 2019, says Shiber, when a groundhog was found on Pearson Place with a trap snapped on its neck. The groundhog appeared to have been caught in the trap for several days and was also euthanized due to its severe injuries.

According to New Jersey Division of Fish & Wildlife, that trap was a conibear trap and is only legal to use, where permitted, when submerged underwater. 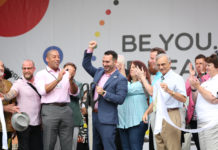 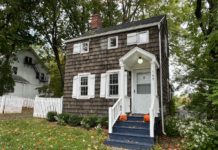