Montclair, NJ – It will be the largest development in Montclair and could have the largest impact on the Township and its residents. On Tuesday, Montclair residents, in the third in a series of informational meetings on the Lackawanna Plaza Redevelopment, got a chance to see what the eight-acre site, owned by developer Dave Placek, might actually look like.

Ira Smith, principal at Smith Maran Architecture, walked residents through a presentation
with conceptual illustrative imagery that brings the submitted Lackawanna Plaza redevelopment plan to the next level.

Smith, whose firm was brought in as a redevelopment design consultant for the Seymour Street project to prevent that project from becoming another Valley and Bloom, said there were many lessons learned from Seymour Street as well as a previous Lackawanna Redevelopment plan draft, which the prior owner of the property (Hampshire & Pinnacle Companies) did not adopt, but gave current owner, Dave Placek of BDP Holdings, an opportunity to learn what the Township — as well as residents who spoke up at the many Planning Board hearings — wanted for the site.

“I know from the diagrams you’ve seen, it’s been very hard to tell, ‘What are we getting? What’s the character of this place?’ So that’s what I’m hoping to do for you this evening,” said Smith.

Smith showed a series of images, some abstract, but many offering ground level views, to help residents experience, as close as possible, what the project might look and feel like. As a disclaimer, Smith said his presentation was prepared in collaboration with Montclair Township and based on the 2017 draft of the Lackawanna Redevelopment Plan.

“What we’re about to see is the product of a lot of people saying what they don’t want, but also what they do want,” said Smith.

The conceptual imagery illustrated various elements of the plan, including pedestrian friendly paths that would allow visitors to amble through the site’s green spaces and cross over through the underground tunnel to the linear park.

According to Smith, the eight-acre site is double the size of the Seymour Street project and comparable in size to the entire Hillside School property, inclusive of the playing fields, plus the Board of Education and Montclair Pre-K properties.

The size of the redevelopment, with five new buildings, in addition to the existing historic waiting room, creates an opportunity for a new neighborhood with a transformative town center, says Smith.

James Cotter, representing the Cloverhill and Grove Terrace neighborhood, said residents who live “in the shadow of this development” have grave traffic concerns and are calling for an immediate and independent traffic study, paid for by the Township, but conducted by an outside entity, independent of both the town and the developer.

“This traffic study would need to happen soon, to make sure it’s occurring at the same time that this plan goes before the Planning Board,” said Cotter, adding that the study is “absolutely crucial for the quality of life and the lived experience of those who are actually going to suffer the consequences of whatever development occurs.”

Another concern raised by residents at the meeting was the proposed height and density of the development.

Smith says two significant factors will reduce the overall apparent height of the proposed five buildings and bring them more in line with other recent developments.

First, substantial stepbacks are required for all the buildings, typically after the fourth floor, but sometimes lower. This means that the one or two floors allowed above the fourth floor will be less visible, and sometimes invisible, from adjacent sidewalks and streets. This also means the highest portion of any structure will always be concentrated in the central part of the building, away from sidewalks and toward the middle of the block.

Second, the tallest building, the one that will house the future supermarket, sits at the lowest point of the site, which is 11’ below Grove Street. As a result, that building will appear a full story shorter when seen from surrounding streets. The Seymour Street project took advantage of the same kind of stepbacks and topographic conditions, so that it doesn’t appear more than 4 or 5 stories from most angles, even though it is actually 6 stories and 81’ tall (excluding rooftop equipment).

Smith, following up on a comment by Martin Schwartz that buildings in the redevelopment area could add an additional 20 feet to the heights described above, said the language in the current draft redevelopment plan makes an allowance for rooftop mechanical equipment, limited to 15 feet above the roof deck, except for cooling towers no higher than 20 feet, which must be set back a minimum of 10 feet from the roof edge. Under current zoning, the standard allowance for the height of rooftop equipment is 10 feet, rather than 15 feet, and there is no specific reference to cooling towers.

Smith said he needed to look into the reasoning for the extra 5 feet and the accommodation for cooling towers, adding that this language is under review.

“It would be misleading, however, for anyone to claim the redevelopment plan dramatically differs from standing zoning with regard to allowable rooftop structures,” Smith added.

Smith also shared that in the slide above, at the base of building D, opposite the underpass, there is a space — 10 feet deep and at least 20 to 30 feet wide — reserved for an art installation.

“This is the first thoughtful development I’ve come across in my career,” said Smith, adding that the developer has been aware of the 7-8 years of conversations about the site and how important the amenities of public space and preserving historic elements are to the community. The pedestrian paths and open spaces are all ADA accessible, fully universal design, with a range of places to sit, rest, relax, or have your midday lunch, Smith added.

Baristanet asked Smith how the new redevelopment plan differs from what had been approved in 2019 along with the then-proposed Lidl supermarket.

“There are four areas of difference. First, there is a greater volume of open public space in the current plan, with three clearly defined outdoor destinations linked to one another with walking paths. Second, historic preservation is better served by adaptively reusing the majority of the historic elements, highlighted by the platform steel stanchions serving as the centerpiece of a rail-themed public space. Third, the integration of art and architecture has been prioritized, with dedicated outdoor surfaces for permanent art on the west side of the plan area and a very large enclosed space reserved for changing art displays along the edge of the linear park on the east side of the plan area. Fourth, while details are still to be provided, we expect sustainable design to be a major consideration for the selection of building systems and their operation. 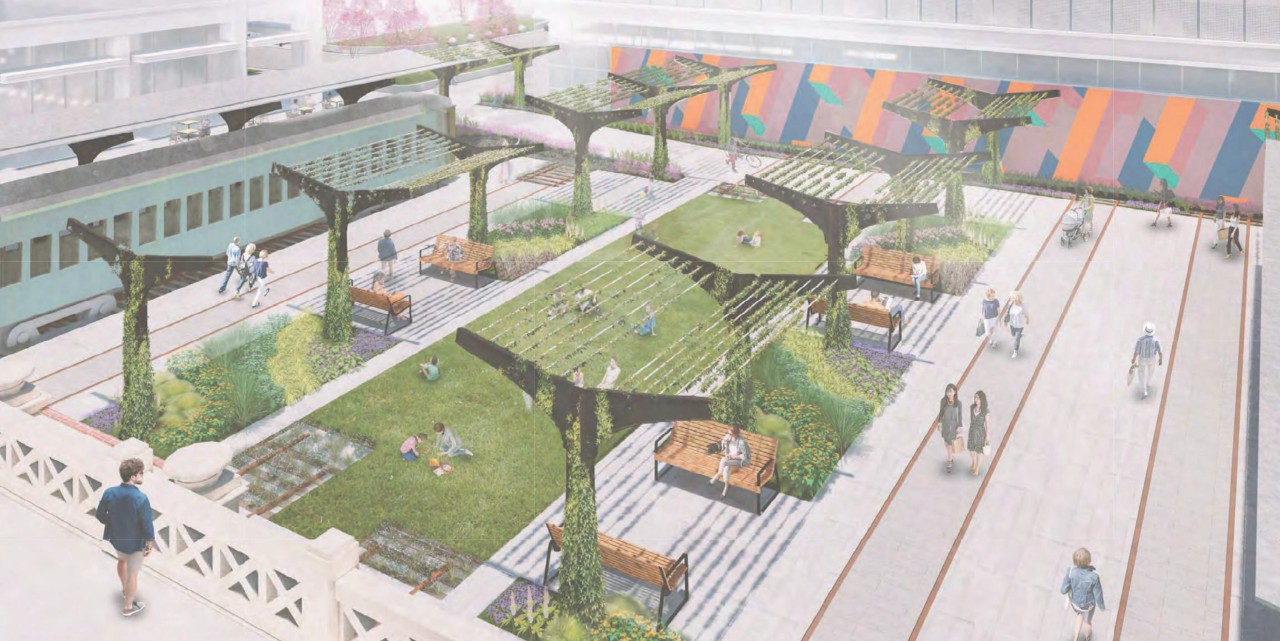 David Greenbaum was thankful for Smith’s involvement in the project but wanted to know more about the number of parking spaces proposed in the current plan.

Planner Janice Talley said she didn’t have that information.

“This is not a site plan,” said Talley. “The Redevelopment Plan establishes parking ratios for various uses and requires all parking to be provided on the site. Details on the size and specific use within each building, which determines the number of parking spaces required, will be provided when a site plan is submitted. This is a site plan. We don’t know the square footage of these buildings. We can’t design the buildings in the redevelopment. We can design the regulations for the buildings.”

On Tuesday, December 6, the Lackawanna Redevelopment plan comes again before the Montclair Council. On December 15, the Historic Preservation Commission is scheduled to review the plan.