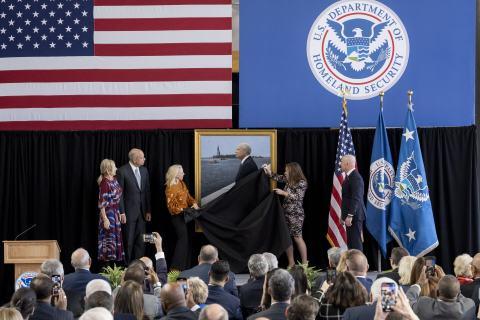 “Today, homeland security is national security. The threats now facing our country are more diverse and dynamic than ever before, yet our Department can address them successfully because we are able to build on the contributions and achievements of those who have preceded us,” said Secretary Mayorkas. “Today, we celebrate one of those individuals, one of our great leaders, Secretary Johnson. In honoring Secretary Johnson by unveiling his portrait today, we honor the Secretary, Dr. Susan DiMarco, their children Natalie and Jeh Jr. – when one serves, the family serves – and we honor all those past and present who have made and continue to make the Department as great as it is and the future of America promising for generations to come.”

Former Secretary Johnson addressed the audience – which included family, friends, former DHS Secretaries Chertoff and Kelly, colleagues, and the DHS workforce – and expressed his gratitude for the opportunity to serve and his appreciation for those dedicated to serving the DHS mission.

“I had the good fortune of a terrific leadership team and together we led the Department of Homeland Security. This ceremony is the capstone, not just of my career at DHS, but my career in Washington, encompassing my time as General Counsel at the Department of the Air Force, General Counsel at the Department of Defense, and Secretary of Homeland Security,” said former Secretary Johnson. “I used to take special pride when at least one person over the course of a week would say ‘thank you for your service’, so I want to thank all of you who work here today, from Secretary Mayorkas on down, from the bottom of my heart, thank you for all you do to protect our Homeland and thank you for your service.”

The official portrait, painted by Robert A. Anderson, is a tribute to Secretary Johnson’s service to the Department and the nation. The portrait will be displayed in the hallway of the Office of the Secretary at DHS Headquarters in Washington, DC. 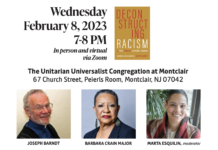