Montclair, NJ – Change is coming. That’s the takeaway from watching both the Montclair Planning Board and the Montclair Historic Preservation Commission, who have devoted their most recent meetings to reviewing the Lackawanna Plaza Redevelopment Plan. This Monday, when the Planning Board meets again, it will have this resolution from the HPC to add to their recommendations for the site to conform to the master plan.

The HPC’s findings echo many of the issues Montclair Planning Board members have already raised at their meeting.

In their resolution, the HPC states “the buildings, masses (height, width and depth) are out of scale and disproportionate to the historic scale of the immediately surrounding neighborhood and that “massive buildings will dominate and minimize the historic significance of the train station and the historic Redevelopment Area.” 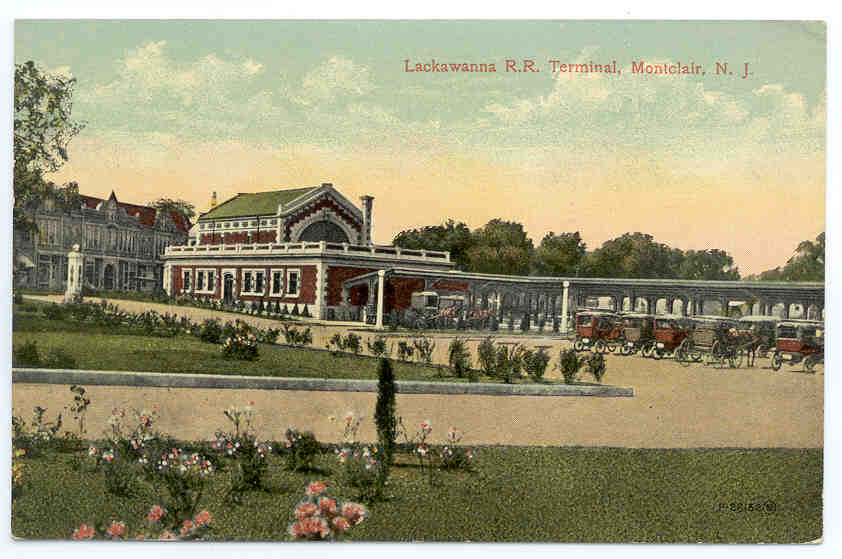 The HPC added another element to the list of key historic structures and elements detailed in the redevelopment area  — the viewshed — the relevant lines of sight that protect the view of a historic site.

The HPC is calling for eliminating Building C altogether, a building slated for a mix of office space and retail, to protect and enhance the viewshed from Bloomfield Avenue to the historic Waiting Room (the structure that houses Pineapple Express currently).

“The massing of Building C can be redistributed among Buildings A, B, D and E possibly in the form of taller, narrower structures or the lengthening of building A into the Station Plaza area. The Main Plaza and the Station Plaza should be a single coherent plaza. At a minimum, the Commission recommends that the base dimensions of Building C be substantially reduced or the design of the building be otherwise altered so as not to interfere with the historic viewshed to the waiting room building,” the resolution states.

The HPC says all historic features — the illuminated masonry piers, the horse water trough and the steel stanchions which support concrete canopies, known as ‘butterfly sheds’ over the train platforms — are to be retained in place.

The HPC recommends the adaptive reuse of all historic elements into the redevelopment project and states that “if during excavation, original train tracks are uncovered, on either the west or east parcel, they should be adaptively integrated into the plaza.”

When Lackawanna Was A Station

Lackawanna Plaza, at over eight acres, will not only make history as the largest redevelopment project in Montclair, it’s also, as the HPC states, “the most significant historic site within the Township.”

Kathleen Bennett, chair of the HPC, calls the railroad the driving force that turned Montclair from “a sleepy agricultural town to a thriving suburb.”

That history dates back to June 28, 1913, when Montclair celebrated of the opening of the newly completed Lackawanna Railroad Terminal. School children lined the processional route, waving flags, as the assembled dignitaries congratulated each other before partaking in a luncheon at the Hotel Montclair. There was a commemorative booklet depicting the new terminal. The station was lauded for its Grecian Doric style of architecture, tapestry brick, and marble chip concrete. Architect William Hull Botsford, the man who designed what was dubbed “the handsomest and best arranged suburban railroad terminal in the United States,” died tragically a year before the opening, aboard the RMS Titanic on April 15, 1912.

Former township historian, Jack Chance, in a letter dated 1981 and in the collection of the Montclair History Center, highlighted the architectural significance of the site, the architectural genius of Botsford and the site’s importance as a transportation center in the history of the township of Montclair.

The HPC, in their resolution, is critical of the redevelopment plan, stating the “design and placement for the new buildings, the loss of context for the platforms especially separating them from the main station, as well as the renderings showing a passenger railcar in the middle of a plaza with bits of railroad track show the authors of the plan neither understand nor appreciate the historical significance of the site, its roles in the development of the Montclair, and the historical and architectural significance of the Montclair Town Center Historic District.”

To bring the plan into conformance with the Historic Preservation Element of the Master Plan, the HPC calls for several amendments to the plan, including:

Below are the historic structures and elements the HPC is requiring to be preserved in place and adaptively reused. The one exception is the copper dome with concrete columns on the Eastern Parcel that serves as an entrance to the underground tunnel. The HPC states this structure “should” be preserved because it depicts the history of the site when it was first redeveloped in the 1980s.