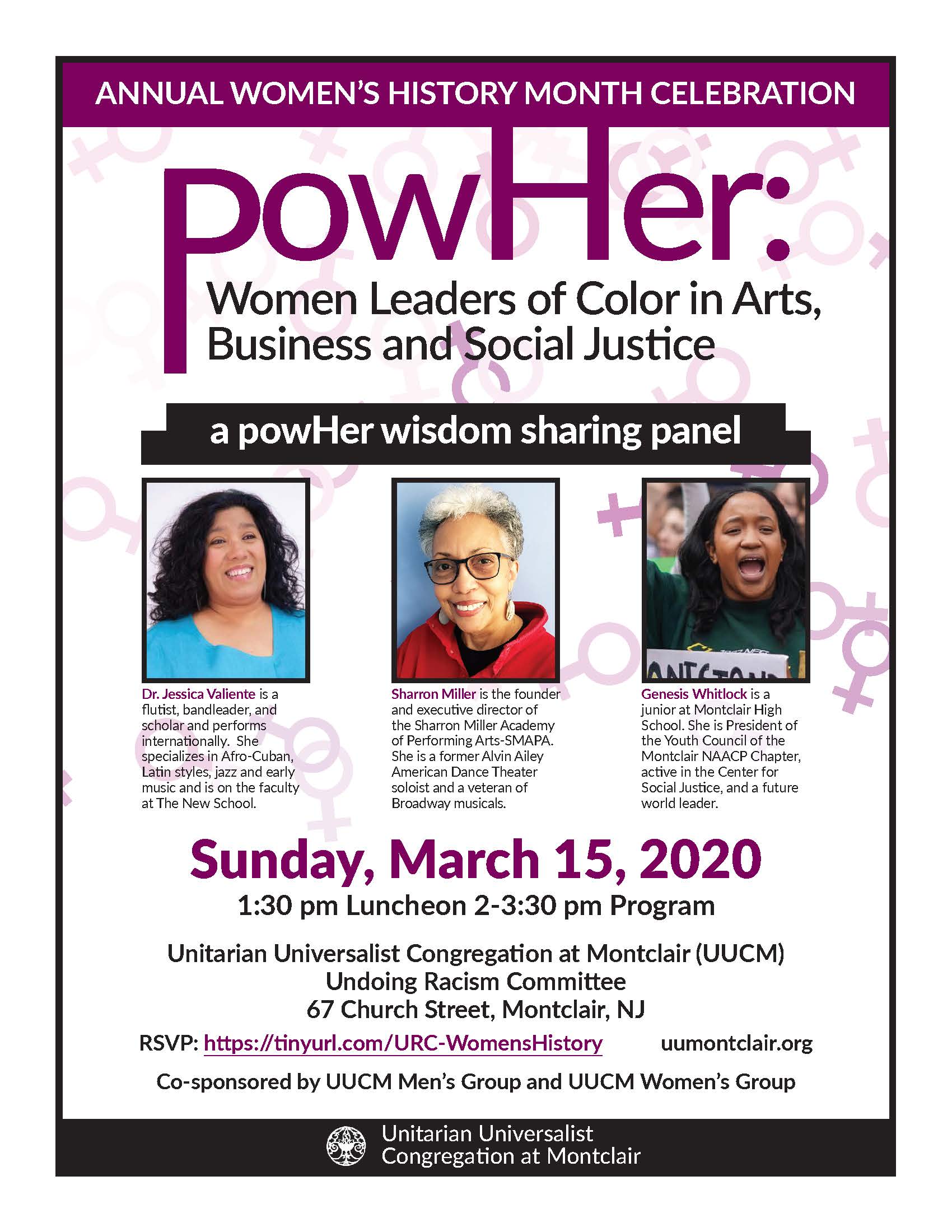 Sponsored by the Undoing Racism Committee at UUCM, they are hosting its 7th Annual Women’s History Month Program: “PowHer: Women Leaders of Color in Arts, Business, and Social Justice” on Sunday, March 15, 2020, 1:30 PM to 3:30 PM in Fletcher Hall. Register at: tinyurl.com/URC-WomensHistory

Women of color are leaders in many fields, but one area that stands out is the arts. Leadership in the arts intersects with leadership in business and social justice. The ability to create music, art, and dance and share these creations as part of the broader cultural landscape, while thriving financially, is a feat. For women of color, it is both a feat and a gift to the world around them. Bringing strong cultural identities to the forefront of expression models excellence and allows others in the community to leverage that power on behalf of social justice in the broadest sense of the world. That is the essence of PowHer.

This year’s featured musician will be Dr. Jessica Valiente, a conservatory-educated flutist specializing in Afro-Cuban, and Latin styles. Dr. Valiente is a celebrated performer, musician, and leader, who brings technical expertise and joy to everything she does. Her extensive musical range includes salsa, jazz, folk, rock, world music, and classical chamber music.
As an actor/musician, Dr. Valiente has performed at Teatro Pregones, a critically acclaimed bilingual Puerto Rican repertory theater.

Dr. Valiente’s selections for this program will include standards such as ‘Willow,Weep for Me,” the Latin-style bolero, “Recordare tu boca,” among others. A special surprise will be announced at the program, as Dr. Valiente will have three special guest musicians performing with her!

As a leader in her field, Ms. Valiente has taught at colleges and universities throughout the tristate area, including Montclair State University, and is currently on faculty at The New School. She has a BA in Music from Barnard College, an MA in Music Performance from Queens College, and a Doctor of Music Arts from the CUNY Graduate Center.

Sharron Miller, founder and artistic director of Sharron Miller’s Academy of the Performing Arts (SMAPA), is a former Alvin Ailey principal dancer, who made her mark on Broadway, while also appearing in hundreds of radio and television commercials.  Founded in 1996, SMAPA has served as a beacon for aspiring ballet and modern dancers, children excited to explore movement and rhythm, and adults who continue to enjoy kinetic expression. It is a source of cultural pride and expression that has attracted thousands of supporters and students throughout the years, including many young people who ascended into the highest echelons of dance, choreography, and professional performance.

Educated at the Juilliard School, Ms. Miller understands the power of exposure, education, and modeling excellence in the arts as a leader and a woman of color. Ms. Miller continues to develop and implement her arts enrichment and community outreach programs for students in Montclair, Newark, and Paterson. While Ms. Miller has amassed a great deal of prestige and accolades throughout the years, she has never wavered in her commitment to improving the lives of people through the arts.  She notes: “As a dancer, teacher and arts advocate, I have always believed ‘excellence’ has no color.  If we strive for excellence in all that we do, the color of your skin should not matter. The content of your character and the content of your work should speak for itself.

The Arts give each individual participant a ‘voice’ through which they express feelings, hopes and dreams – these are universal.  We all want the best for our children, our families and our communities.  Through the arts we can learn to embrace and respect the cultural diversity of this wonderful country.”

Genesis Whitlock, President of the NAACP Montclair Youth Council, is a junior at Montclair High School (MHS), where she has emerged as a strong young leader. At MHS, she is part of the Social Justice Learning Community, as well as being Editor and a staff writer at the school’s newspaper, the Mountaineer. Although she is still very young, Ms. Whitlock is already recognized for her tireless work and passionate discussions and speeches about her areas of focus in the last two years—criminal justice and racism. She is currently leading the charge to get students onto the Montclair Board of Education, which is dominated by adults 100%. In addition, she is holding a series of community-based discussions about the school-to-prison pipeline and what must be done to disrupt that dynamic.

Ms. Whitlock is recognized as a talented writer, moving orator, and compassionate young woman, so it’s not surprising that she is currently being vetted by some of the top colleges and universities in the United States. Ms. Whitlock stands on the precipice of a future in which she will use her gifts, her language, and her endless positive energy to change the world for the better.

The Undoing Racism Committee is a long-standing committee of the Unitarian Universalist Congregation at Montclair.  The Committee’s goal is to work with the congregation and the wider community to develop, strengthen and act upon anti-racist, multicultural perspectives through worship services, educational programs, lectures, book and film discussions, cultural events and community involvement.

The Unitarian Universalist Congregation at Montclair was founded in 1897.  It is a liberal religious community seeking transformation in hearts, homes, community and the world.

Jane Gaertner, Chair of the Undoing Racism Committee, said “The Undoing Racism Committee’s sustained focus on systemic and institutional racism gives people in the community an opportunity to act in concrete ways to change policies which oppress, in education, criminal justice and other areas. This program celebrates women of color and their inspiring leadership and strength we can model in Montclair and the region.”

For more information about the Unitarian Universalist Congregation at Montclair, visit uumontclair.org