Homage to Pine Street: The Art of Neighborhood 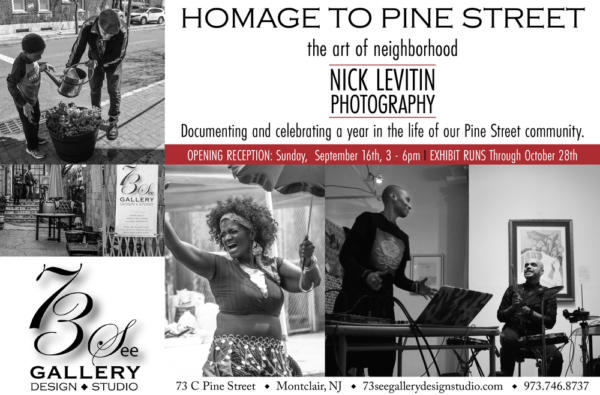 Photography by Nick Levitin. Documenting and celebrating a year in the life of one block on Pine Street in Montclair.  All are invited to the Artist’s Talk on Sunday, October 14th at 3 PM.

“The idea for this exhibit came out of a conversation Mary Z (curator of 73 See Gallery) and I had almost a year ago. She described her fierce devotion to the neighborhood and the role an art gallery could play in the life of a community. She passionately believes that a neighborhood can be as much an artistic endeavor as a painting, a piece of sculpture, or a photograph. We wanted this project to give the people of Pine Street a chance to walk into 73 See Gallery and see themselves anew – as vibrant artistic creators of a community. Over a year has passed since our initial conversation and the photographs on exhibit, taken during the past twelve months, reflect the diversity and creativity of the people who live and/or frequent this street, as well as the role that Mary and 73 See Gallery has had on this neighborhood.  It is as the title suggests, A Homage to Pine Street: the art of neighborhood.”