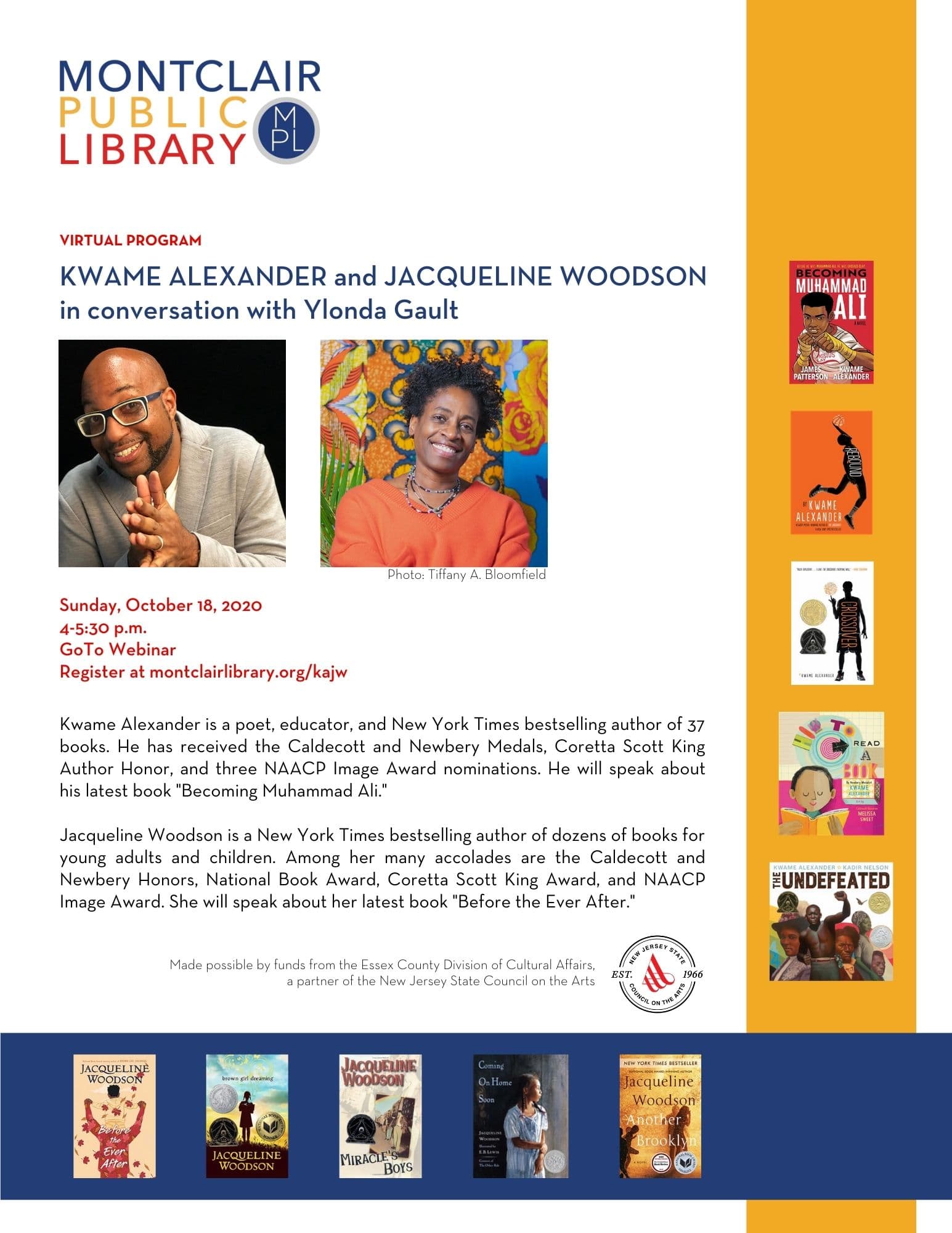 Award-winning authors, Kwame Alexander (“Becoming Muhammed Ali”) and Jacqueline Woodson (“Before the Ever After”) will speak about their recently published books. Moderated by Ylonda Gault. Made possible by funds from the Essex County Division of Cultural Affairs, a partner of the New Jersey State Council on the Arts.

Kwame Alexander is a poet, educator, and New York Times Bestselling author of 37 books, including SWING, THE WRITE THING, REBOUND, which was shortlisted for prestigious Carnegie Medal, Caldecott-Medal and Newbery-Honor winning picture book THE UNDEFEATED, illustrated by Kadir Nelson, HOW TO READ A BOOK, illustrated by Melissa Sweet, and, his NEWBERY medal-winning middle grade novel, THE CROSSOVER.

The Host and Executive Producer of the television program, WordPlay, a new kids television program, Kwame is also a regular contributor to NPR’s Morning Edition, and the recipient of numerous awards, including The Coretta Scott King Author Honor, Three NAACP Image Award Nominations, and the 2017 Inaugural Pat Conroy Legacy Award. In 2018, he opened the Barbara E. Alexander Memorial Library and Health Clinic in Ghana, as a part of LEAP for Ghana, an international literacy program he co-founded. Kwame currently serves as the inaugural Innovator-in-Residence at the American School in London, and the Founding Editor of VERSIFY, an imprint of Houghton Mifflin Harcourt that aims to Change the World One Word at a Time.

Jacqueline Woodson is the recipient of the 2020 Hans Christian Andersen Award, the 2018 Astrid Lindgren Memorial Award, and the 2018 Children’s Literature Legacy Award. She was the 2018–2019 National Ambassador for Young People’s Literature, and in 2015, she was named the Young People’s Poet Laureate by the Poetry Foundation. She received the 2014 National Book Award for her New York Times bestselling memoir, Brown Girl Dreaming, which also received the Coretta Scott King Award, a Newbery Honor, the NAACP Image Award and a Sibert Honor. She also wrote the adult books Red at the Bone, a New York Times bestseller, and Another Brooklyn, a 2016 National Book Award finalist. She is the author of dozens of award-winning books for young adults, middle graders and children; among her many accolades, she is a four-time Newbery Honor winner, a four-time National Book Award finalist, and a two-time Coretta Scott King Award winner. Her books include New York Times bestsellers The Day You Begin and Harbor Me; The Other Side; Each Kindness; Caldecott Honor book Coming On Home Soon; Newbery Honor winners Feathers, Show Way, and After Tupac and D Foster; and Miracle’s Boys, which received the LA Times Book Prize and the Coretta Scott King Award. Jacqueline is also a recipient of the Margaret A. Edwards Award for lifetime achievement for her contributions to young adult literature and a two-time winner of the Jane Addams Children’s Book Award. (photo credit Tiffany A. Bloomfield)