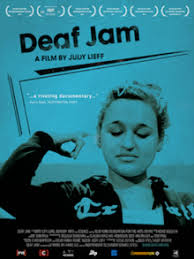 Screening of film Deaf Jam, followed by Q & A with writer and director Judy Lieff.

Judy Lieff is a filmmaker and educator with a background in dance and experimental film. She is on faculty at SUNY Purchase teaching film production that explores the intersections of film and dance. Deaf Jam, her first feature documentary, premiered on the PBS series, Independent Lens, and was selected to participate in the American Film Showcase (AFS) – a partnership between the Department of State’s Bureau of Educational and Cultural Affairs and USC’s School of Cinematic Arts.

Deaf Jam is the story of deaf teen Aneta Brodski’s bold journey into the spoken word slam scene. In a wondrous twist, Aneta, an Israeli immigrant living in the Queens section of New York City, eventually meets Tahani, a hearing Palestinian slam poet. The two women embark on a collaboration creating a new form of slam poetry that speaks to both the hearing and the Deaf.