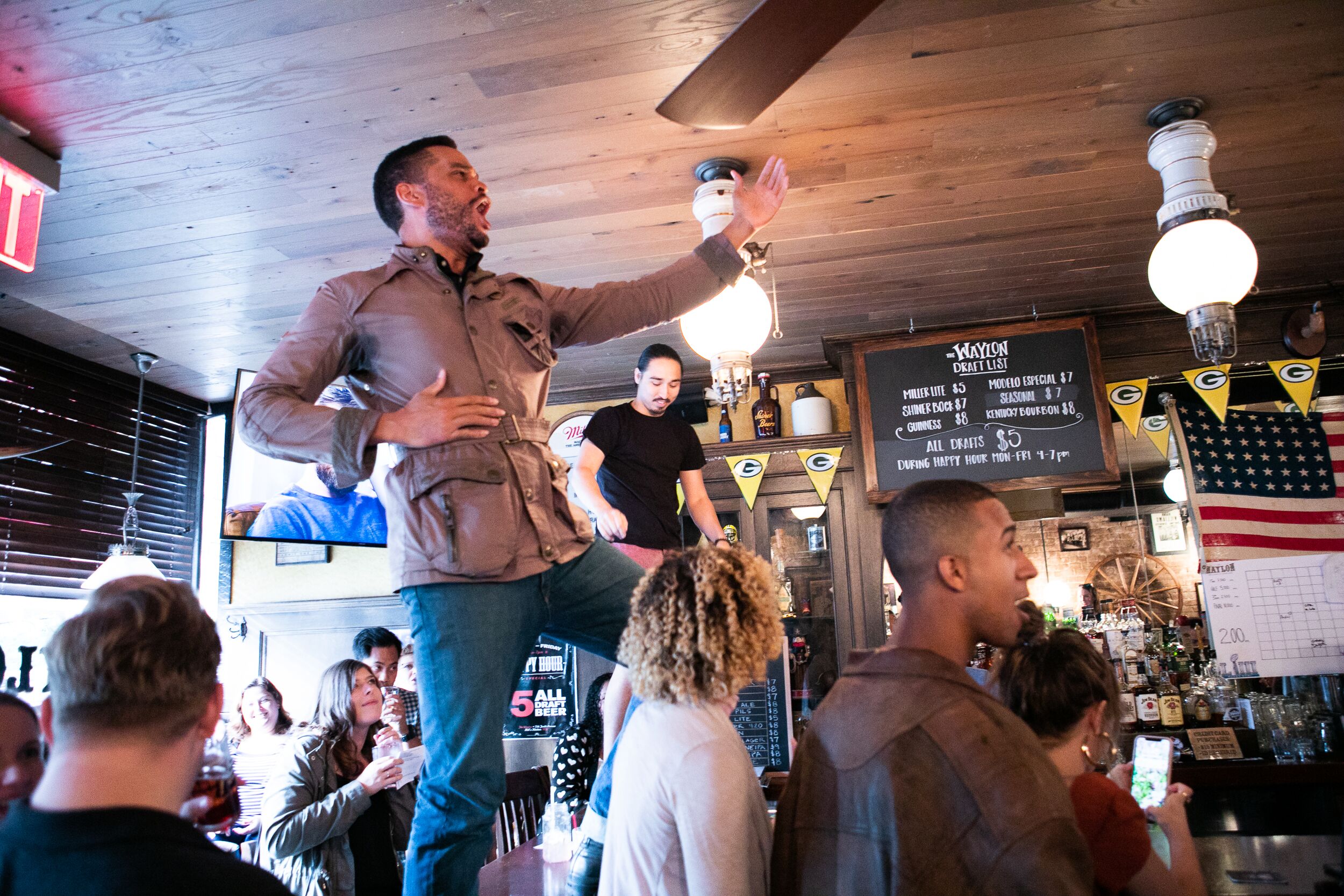 Check-in is at 2:30 pm at The Gaf. Tickets are $49 and are available at: https://www.brownpapertickets.com/event/4081927. Tickets include performance and four drinks (beer, wine, and select cocktails). $25 “sober” tickets are also available (use discount code “SOBER” at checkout), which include admission only.

It’s impossible to have just one! NY Shakespeare Exchange returns to Hell’s Kitchen to serve up a fresh, new round of ShakesBEER, NYC’s Original Shakespearean Pub Crawls, in May.

The latest edition of NYSX’s wildly popular event, themed “The Games We Play!” will explore some of the great challenges, contests, and competitions in Shakespeare’s most troubled dramatic relationships, including scenes from Hamlet, Henry IV Part 1, and The Merchant of Venice, and Much Ado About Nothing, directedby Martavius Parrish, Shane Breaux, and Ross Williams, featuring Alisha Espinosa, Brendan Averett, Tara Pacheco, Philip Gregory Burke, Katelin Wilcox, Alex Michell, Aurea Tomeski, and C Bain.

“…a great, boozy, old time, which mixes the best of drunken squalor with the highest of art. William Shakespeare would most definitely approve.”

“By the time the fourth and final bar and beer roll around, the edges of time and space blur, and I feel transported to Elizabethan times when crowds of regular people would gather for premieres of plays we now revere and guzzle beers as a community. Huzzah!” – Paste Magazine

“Whether you’re a Shakespearean, a beer enthusiast, or simply looking for an unorthodox outing, the infectious spirit of the Bard takes over for an afternoon.” – Plays to See

Produced by NY Shakespeare Exchange (NYSX), a company that inspires conversation and builds communal experiences through the work of William Shakespeare, the ShakesBEER Pub Crawls treat audiences to an immersive dipso-literary experience that harks back to Elizabethan times. But it is the ability of the Bard’s timeless poetry to shed light on contemporary issues that NYSX is most eager to share.

New York Shakespeare Exchange is internationally known for its The Sonnet Project (in which more than 1,500 volunteer filmmakers from around the world have joined the discussion by creating short films in New York locations based on all 154 Shakespeare sonnets). NYSX produces at least one mainstage production a year.  In 2016, NYSX produced Hamlet10, in which 10 actors played the Danish Prince, and a stunningly relevant period-adaptation of Shakespeare’s epic poem, “The Rape of Lucrece,” which delved into sexual violence against women.  This past season NYSX staged a critically acclaimed, smart phone-obsessed Much Ado About Nothing, which plugged into the zeitgeist of fake news and alternative facts.  The company’s most recent production, a new adaptation of A Midsummer Night’s Dream, was conceived and directed by Brendan Averett and ran in January/February 2019 at the Secret Theater in Long Island City, NY.

In the coming months, NY Shakespeare Exchange will offer a number of exciting community-based events. The next iteration of their Freestyle Lab series-part performance, part lecture, and part town hall conversation-presented free of charge on May 21 at the 53rd Street branch of the NY Public Library will use the current ban on transgender military service as a springboard for exploring how our idea of those who serve might broaden and change when we consider the experience of trans service members. The evening, entitled “Armor as Strong: Trans Warriors through a Shakespearean Lens” will feature trans actors performing speeches and scenes from some of Shakespeare’s greatest tales of military conflict.