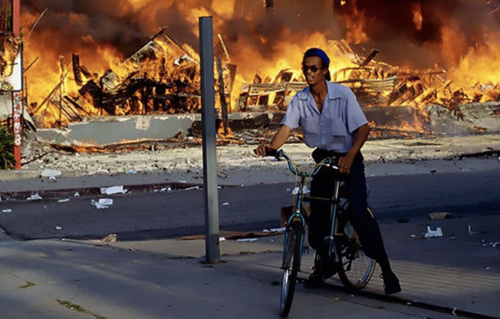 In 1992 while in residence at Crossroads as one of the company’s original Associate Artists, Anna Deavere Smith received an important calling to begin developing a response to the tumultuous aftermath of the Rodney King trial verdict. That play, Twilight: Los Angeles, 1992, premiered in Los Angeles at the Mark Taper Forum and made national news for its unique and unflinching look at the fallout from the 1992 Los Angeles uprisings. “Not only did Smith capture that moment in our history so well, she created a searing, innovative and truly American piece of theater.” – Great Performances

Now, 28 years have passed and our country has yet to stop the violence against black people. So earlier this summer, the murders of Ahmaud Arbery (Brunswick, GA), Breonna Taylor (Louisville, KY), and George Floyd (Minneapolis, MN) prompted Channel THIRTEEN’s Great Performances to stream Marc Levin’s film adaptation of “Twilight: Los Angeles, 1992” and provided Crossroads special permission to link the film to Crossroads’ online platform as the opening production of its 2020-2021 season.

By special arrangement with WNET